Downtime No 1 – The Triking. 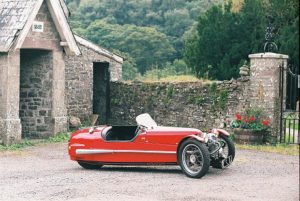 Last year, after much head-scratching and mulling over available models, new kits, and the battered and/or much-patched-up survivors of an earlier and more relaxed way of motoring I took the plunge and bought the (an) object of my desire – a motorbike-engined three-wheeler – in this case a 1989 Series One Triking.

Motorbike-engined three wheeled cars were popular before the last war, due largely to the fact that three wheels and a light chassis provided a cheap, safe alternative to two or four wheeled transport. Morgan and BSA both made three-wheeled cars, among others. The pre-war cars could be fast too, and some were raced at Brooklands, reaching speeds of over 90 mph.

Around 2012 the new Morgan three-wheeler became available. Harley-Davidson powered, craftsman-bodied, and with an eye-watering price tag to match. Well before that though, in the mid-seventies, an enterprising Lotus Car Company draftsman by the name of Tony Divey commercially developed his own three-wheeler design, the Triking, loosely based on the pre-war Supersport racing Morgans. The Triking was designed initially for competition use. My car is a late example of the original Triking, as raced by Tony.

So what do you get with the Series One Triking?

To me the car speaks volumes about the designer, with a front end reminiscent of the old Lotus Six and Seven models. This one has the standard engine for a Series One – a  circa-1976 big block 1000cc round-fin Moto-Guzzi twin. Polished up, the engine is an imposing piece of Italian engineering sculpture in it’s own right. In the cockpit there is a small-diameter leather covered steering wheel, two seats side-by-side, and a machine-turned aluminium dashboard with full instrumentation. The stubby gear lever links to the Guzzi five-speed box. The handbrake is way up on the front of the transmission tunnel. It works the two front disc-brakes, and is highly effective. There is no boot, but there is a tiny luggage rack, and additional storage room is provided behind the seats.

Because the Triking weighs a little more than the original Guzzi touring bike which provided the engine and running gear, the performance is similar, if a little slower. Not earth-shattering, but certainly fast enough for three wheels. And the noise from the twin exhausts? Glorious!

And what don’t you get?

The Triking has no roof or hood, no reverse gear, and no airbags of any kind. Oh, and there’s no heater. A rolled-up umbrella is a permanent cockpit feature, in case of heavy showers and/or the odd breakdown. Three wheels for three Seasons. The fourth season, Winter, is a time for maintenance, with the odd run out in mild, dry weather.

The Triking is small, non-threatening to other road users, noisy, and great fun. It will evidently do “the ton” if pushed. It can be driven solo, or two up. The family love it! The first question people ask me when I’m out with the Triking is – “do you have a proper car?” The answer of course is that I have two proper cars.

One has four wheels and a tin roof. That’s for work, distance, and bad weather.

The other has three wheels and no roof. It is purely for fun.